The Complete Poetical Works of Henry Wadsworth Longfellow By Henry Wadsworth Longfellow Biographical Sketch Henry Wadsworth Longfellow, whose descent is traced from William Longfellow of Byfield, Massachusetts, an English immigrant of the third quarter of the seventeenth century, was the son of Stephen and Zilpha Wadsworth Longfellow. He was born in a house still standing at the corner of Fore and Hancock streets, Portland, Maine, February 27, 1807. He was trained for college at the Portland Academy, and in 1821 entered Bowdoin College (founded but twenty years before), was graduated in 1825, and immediately received an invitation to teach the modern languages in his Alma Mater, with leave of absence for travel and study in Europe. He sailed for France in may, 1826, where he spent the rest for that year. Early in 1827 he went to Spain for eight months. A year followed in Italy; and after six months in Germany, he returned to America in the summer of 1829. In September of that year he entered upon his duties as Professor of Modern Languages. In September, 1831, he was married to Mary Storer Potter, second daughter of Judge Barrett Potter of Portland. His study and his writing during his residence at Brunswick made him at last feel restricted in opportunity; and he was casting about for some more congenial position, when he received, in December, 1834, an invitation to succeed Mr. George Ticknor as Smith Professor of Modern Languages in Harvard University, and at once accepted the offer with enthusiasm. The invitation gave an intimation that he might, if he chose, spend a year or eighteen months in Europe for the purpose of perfecting himself in German; and in April, 1835, he made a second journey of study and observation. He spent the remainder of the year in England, the Scandinavian countries, and Holland, where he was detained by the illness of his wife, who died at the end of November in Rotterdam. Thence he passed to Germany, where he wintered in Heidelberg, occupying himself closely in study. Near the end of June, he went to the Tyrol, spent the summer in Switzerland, and by slow stages made his way to Havre, whence he sailed for home in October, 1836. In December of this year he established himself in Cambridge, and took up his college duties. In the summer of 1837 he found quarters in the historic house which had been Washington's headquarters during the siege of Boston, where he had for a while as co-tenant Dr. Joseph Worcester, the lexicographer. The house at the time was owned and occupied by Mrs. Andrew Craigie, widow of a commissary officer in the American army, who bore the distinguished title Apothecary-general. Here Mr. Longfellow lived during the remainder of his life, except that he had also... ------------------------------------------------------------------------------------------------------------------------------------------ Windham Press is committed to bringing the lost cultural heritage of ages past into the 21st century through high-quality reproductions of original, classic printed works at affordable prices. This book has been carefully crafted to utilize the original images of antique books rather than error-prone OCR text. This also preserves the work of the original typesetters of these classics, unknown craftsmen who laid out the text, often by hand, of each and every page you will read. Their subtle art involving judgment and interaction with the text is in many ways superior and more human than the mechanical methods utilized today, and gave each book a unique, hand-crafted feel in its text that connected the reader organically to the art of bindery and book-making. We think these benefits are worth the occasional imperfection resulting from the age of these books at the time of scanning, and their vintage feel provides a connection to the past that goes beyond the mere words of the text. 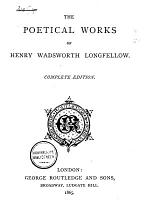 The Poetical Works of H.W. Longfellow 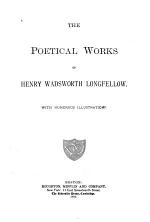 Authors: HardPress, Longfellow Henry Wadsworth 1807-1882
Categories: American poetry
Unlike some other reproductions of classic texts (1) We have not used OCR(Optical Character Recognition), as this leads to bad quality books with introduced typos. (2) In books where there are images such as portraits, maps, sketches etc We have endeavoured to keep the quality of these images, so they 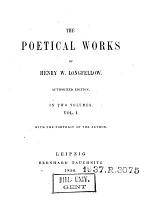 Education for Sustainability in Tourism

The Power of Spiritual Intelligence

To Fathom the Gist

How to Write a Childrens Book and Get it Published

Catechetical Readings In The Pentateuch (1852)

How NOT to use a Smartphone

The Jacobite Attempt Of 1719

A Year with the Mystics